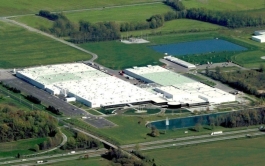 April 12th, 2012 - Toyota Material Handling, U.S.A., Inc.(TMHU) announced today it will be relocating its North American headquarters from Irvine, Calif., to Columbus, Ind. The relocation and eventual closing of the Irvine office will take place in phases, beginning in Fall 2012 and is anticipated to be completed over the next several years.

TMHU, the No. 1 selling lift truck in North America for the last decade, has been headquartered in Irvine since March 2002 at 1 Park Plaza in the Jamboree Center, an Irvine Company property. TMHU currently employs 72 associates in Irvine and another 53 in Columbus. The majority of Irvine associates are being offered relocation and those not moving will be offered severance and job placement assistance.

"Bringing all TMHU associates under one roof will allow us to be more responsive to customer and dealer needs," said Jeff Rufener, TMHU president. "Being on the Columbus campus with our forklift plant will result in more synergies and improved communications between sales and marketing and manufacturing."