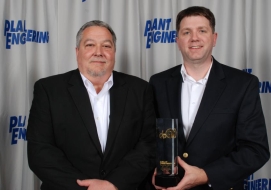 The annual Product of the Year recognition, now in its 24th year, recognizes innovation in manufacturing products. According to the publication, this award sets the manufacturing and engineering industry standard for new product achievement.

"Toyota is honored that our 8-Series 4-Wheel AC electric lift truck was recognized by Plant Engineering and its readers," said Jeff Rufener, president for TMHU. "Having top industry decision makers select our forklift as the top of the line validates Toyota's commitment to producing products with the highest level of quality and durability."