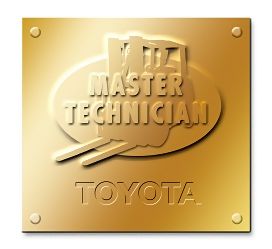 The test consists of more than 300 questions related to the service and maintenance of Toyota lift trucks. Toyota presents the Platinum Level Master Technician Award and the Platinum Level Toyota Certified Trainer Award to the top 10 percent of those who participated from each group.

TMHU Technician training is one of the most vigorous in the industry requiring dealer technicians to complete not only Toyota forklift-specific training, but also Automotive Service Excellence (ASE) certification. TMHU was the first lift truck company to require ASE certification. In addition, to achieve Bronze Level requires a minimum of two years working at a Toyota Industrial Equipment dealership along with the completion of several training courses. The other subsequent levels (silver, gold) require three to five years of working experience at a Toyota Industrial Equipment dealership and additional training courses.

Each Platinum Level honoree received a certificate and a monetary award card. In addition, a plaque bearing their name, dealership and years of service will be displayed in the Platinum Level display case located at the TMHU National Training and Customer Center in Columbus, Ind.

Celebrating 45 years of established operations, Irvine, Calif.-based TMHU is the supplier for the No. 1 selling lift truck in North America since 2002. In addition to the full line of high-quality lift trucks sold under the Toyota brand, the company’s extended industrial equipment solutions include Automated Guided Vehicles and tow tractors.